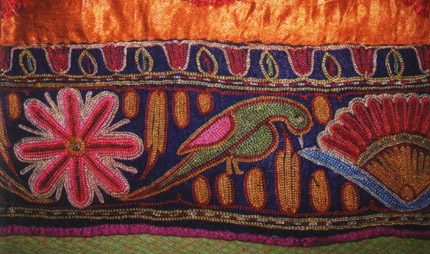 Ari embroidery was largely practiced by the Mochi community in Gujarat, and this craft was responsible for making Gujarat an important centre of embroidery in the 19th century. During Emperor Akbar's time this craft prospered and came to have Persian influence in motifs and material used.

These days, craftspeople involved in Ari embroidery are mostly located in Ahmedabad area, where they do the embroidery on a base cloth which is printed. A ring frame is used for the area where embroidery has to be done to hold the cloth taut.

An awl-like needle called ari is used to pull the thread from under the cloth to the upper side and secure the previous stitch. The stitch, which is very similar to cobbler's stitch is used till the desired design or pattern is embroidered.