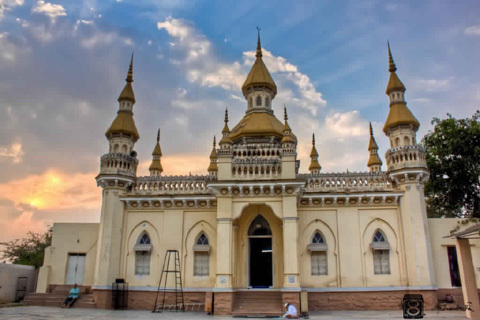 Moorish architecture is a form of Islamic architectonics that originated in the Iberian Peninsula. The peninsula, located in the southwest corner of Europe, is divided between Spain and Portugal, with Spain comprising most of its territory.

Heavily influenced by Roman art form, Moorish architecture is typically characterized by mosaic work, intricate calligraphy, and horseshoe arches. The Spanish Mosque in Hyderabad was commissioned by Nawab Viqar-ul-Umra Iqbal-ud-Doula in the year 1900, after returning from his trip to Spain. The mosque, also known as Jama Masjid Iqbal-ud-Doula, is named after him. An unusual feature of Jama Masjid Iqbal-ud-Doula is, instead of globular domes seen in other mosques, the minarets of this mosque end in slim octagonal spires that are plastered in lime. The prayer hall is decked up with delicate calligraphy and elegant Moorish arches.